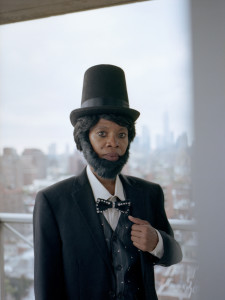 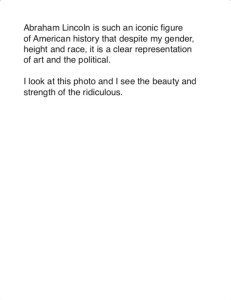 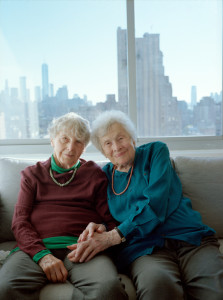 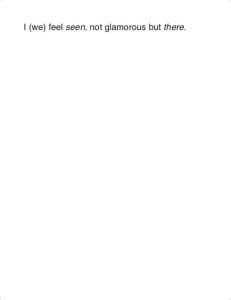 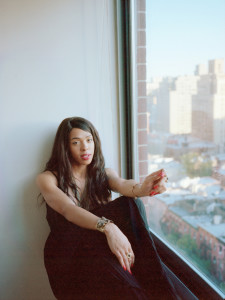 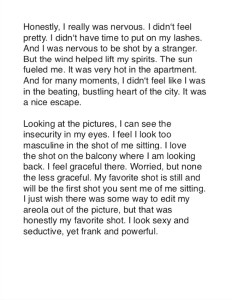 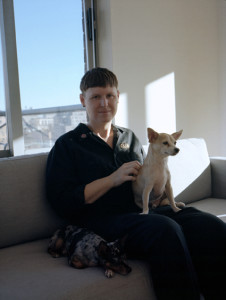 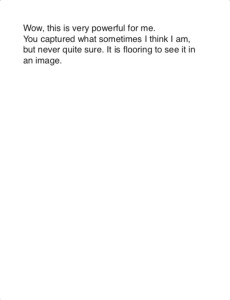 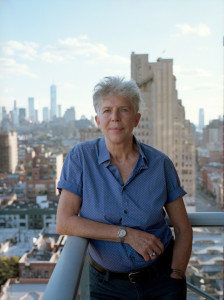 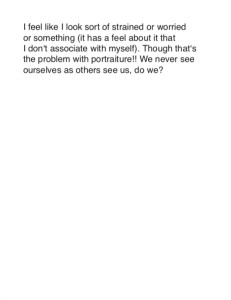 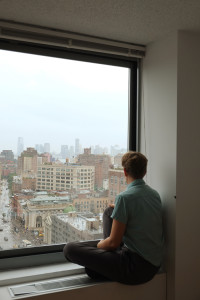 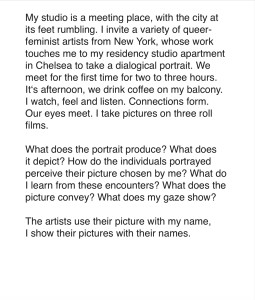 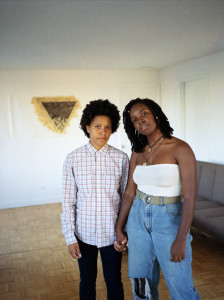 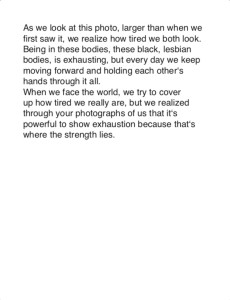 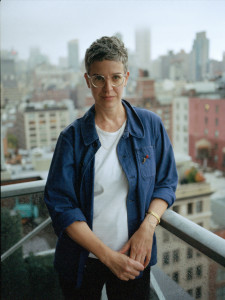 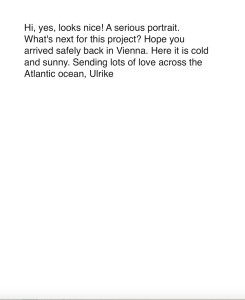 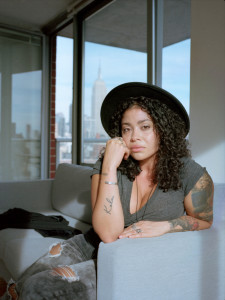 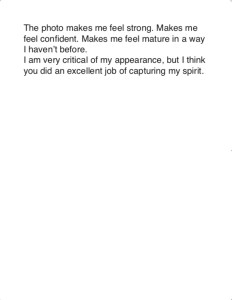 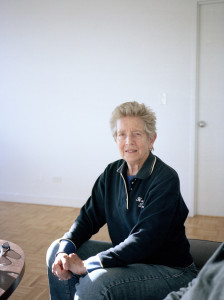 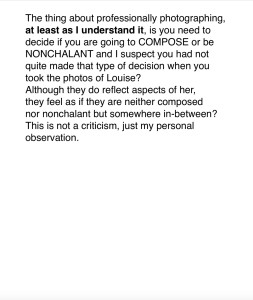 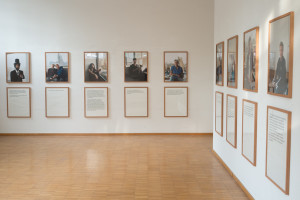 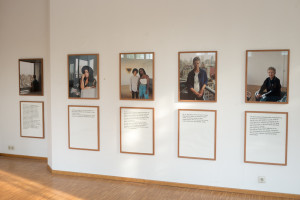 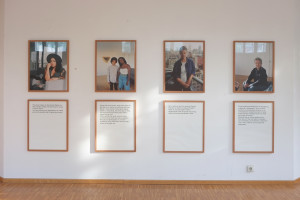 In the current political climate in which cis-male camaraderie is gaining power, this installation explores the in/visibility and diversity of queer-feminist artists. The analog portrait photographs are testimonies of dialog-based encounters at Lena Rosa Händle’s Residency Studio in New York. How do the encounters and connections between Lena Rosa Händle and the protagonists become visible?
Taking time, seeing, listening and engaging with are the starting points of this series, which subsequently produces connection, a process of learning, appreciation and (temporary) community.
A text by the protagonist about their picture hangs, equally framed under each portrait. An additional text by Lena Rosa Händle shares observations, feelings and comments on the encounters.
Through these two layers of text, views are expanded, levels of social inequality made visible, as well as questions asked about the portrait itself.

As Fem Appeal overcomes her fear of heights and steps onto the balcony, she suddenly transforms into the proud, serious and dignified Abraham Lincoln, whom I’ve met on stage in Coney Island. I immediately feel comfortable in her warm presence and enjoy listening to her. Her height and her age surprise and impress me, queer people do not seem to age.
Fem Appeal (*1967 Brooklyn, New York) is a burlesque performer and founder/host of the burlesque show Kitty Nights NYC (2006-2014). During the day she works with teenagers with disabilities in the health education sector. It is important to her to separate her identities, in order to keep her job. Burlesque performers still have a bad reputation.

The reading by the two Jewish Poets moves me profoundly. Eva survived the Holocaust by emigrating with a Kindertransport from Baden near Vienna. The vast dimension of this experience is felt in her essays. I am the only German in the room. I approach them after the reading. Their openness towards me and their enthusiasm for talking German eases me. We become friends, go for dinner while discussing politics and thinking about translating between languages. When Naomi and Eva first met, they were in their sixties. They’ve been a couple for thirty years and live together in two separate apartments in a building on the Upper West Side in Manhattan.
Eva Kollisch (*1925 Baden near Vienna) is a writer and literary and German scholar. She was a Professor at the Sarah Lawrence College in Bronxville, New York.
Naomi Replansky (*1918 Bronx, New York) is a writer and was a translator of among others texts by Bertold Brecht. Additionally, she worked as a programmer for many years.

As she enters my studio, Linda LaBeija is in the middle of a telephone conference. She takes a seat on the Sofa and puts herself in order. With headphones in her ears, she whispers: „You can now start taking pictures.“
Linda La Beija (*1991 Bronx, New York) is a Vogue dancer (HOUSE OF LABEIJA), Spoken Word performer and trans activist. She combines music with Spoken Word. During the day she works with homeless LGBTQ youth.

L.J. Roberts enters my studio with Sparky and Ziggy, her mixed-breed Chihuahuas and immediately starts talking a lot. She tells me about her Polish/Russian background and about her Grandmother who inspired her to produce her works with textiles. Sparky and Ziggy are meanwhile taking over the studio, stretching out on the couch and it is clear that they are an important part of her family.
L.J. Roberts (*1980 Detroit, Michigan) is an artist and teaches at the Parsons School of Design in New York.

By communicating through the camera with Su Friedrich, I feel complicity while at the same time a strong professional observation. She looks at me with a mixture of curiosity, skepticism but also affinity and goodwill. Is it because I’ve known her work since my studies and she is a professor?
Su Friedrich (*1954 New Haven, Connecticut) is a filmmaker and professor at Princeton University.

This self-portrait was taken with a self-timer during the early days of my residency in New York. I turn my gaze towards the city, I feel lofty and free yet at the same time a responsibility for this scholarship.
Lena Rosa Händle (*1978 Berlin) is an artist, photographer and teacher. Alongside her artistic practice, she has worked at the Academy of Fine Arts Vienna for the past four years.

Brittnay´´s Präsenz auf der Bühne erlebe ich als stark, und gleichzeitig ist viel Traurigkeit spürbar. Es ist schwierig hinter ihre Posen zu blicken. I experience Brittany’s stage presence as powerful yet sad. It is difficult to look behind her poses.
Brittany Maldonado (*1987 Bronx) is a Spoken Word performer and artist. She has just given up her office job for the first time in her life. She wants to be true to herself and live her dream.

Nia & Ness enter my studio and give me a warm hug. Their great love is constantly present. In front of the camera, they melt with each other and seem to have forgotten me completely. I say „It feels like a mirror of my own relationship“ and just at that moment, I receive a message from my partner. As a white couple, we always feel safer. I can tell by looking at Nia that constant awareness and defensiveness are tiring.
Ness White (*1987 California) and Nia Shand (*1993 New Jersey) are a couple since 2013. In 2016 they founded the company Nia & Ness and since perform together as a poetry-performance-dance duo. They process their daily experiences as a black, lesbian couple with dance performances by Nia and with spoken word poetry by Ness. During the day, Ness works as an educator and Nia at a primary school.

Ulrike Müller has the idea, to try a painter portrait with dog referring to Joan Mitchell with George the poodle, but then it does not fit with her evening plans to bring the dog. When she enters my studio, she says, „It’s hard to take a picture of me.“
Ulrike Müller (*1971 Brixlegg, Tyrol) is an artist living in New York since 2002. She was part of the queer-feminist artist collective LTTR. For a few years now, she has been able to live from her art.

Louise Fishman arrives with her wife and manager Ingrid Nyeboe (* 1956). Both have academic and artistic backgrounds and tell legendary stories about the gay and lesbian liberation movement in New York in the 1970s, which they were involved with.
Louise Fishman (*1939 Philadelphia) is a painter, she is able to live from her art.